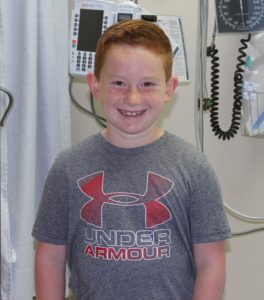 8-year-old Brady Majors is all too familiar with room 7 in the Emergency Department at CHRISTUS St. Michael Hospital-Atlanta. On June 2, 2018, Brady was brought to the ED by his parents, Brian and Kimberly. After consulting with the physician, it was believed he could be suffering from a streptococcal infection (strep) or appendicitis. Brady’s lab test for strep came back quickly and was positive. But his care in the ED did not stop there. Not thoroughly convinced that something larger might be going on, a CT was ordered and showed Brady was also suffering from appendicitis. From there, things moved quickly according to his mom to get him transferred to Texarkana for an emergency appendectomy.
“After the first test came back positive, the doctor could have stopped, but he didn’t,” said Kimberly. “Everyone was very attentive to what Brady was experiencing; it was reassuring to know we made the right call by coming here.”
“We are thankful to have a hospital with high-quality care right here in our community,” said Brian, Brady’s dad. “During such a time of panic, the doctors and staff quickly and accurately found a serious problem and got a solution.”
Six weeks later, Brady returned to the ED after a minor fishing accident left his favorite lure lodged in his right cheek. “They put us in the same room as before,” Kimberly commented. “I told Brady they would put his name on the door after this summer.”

By continuing to use the site, you agree to the use of cookies. more information